When a Nation Forgets God 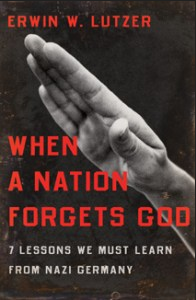 When a Nation Forgets God

February 23, 2010 by Aaron Armstrong
George Santayana (along with numerous other philosophers over the centuries) said, “Those who do not learn from the past are condemned to repeat it.” By understanding the past, you can see the trends that lead to specific trends that transform a culture—for good or for evil.
In When a Nation Forgets God, Erwin W. Lutzer takes this sentiment to heart, revealing to readers seven societal trends that led to the rise of Nazi Germany, and how Christians should respond.
Considering Trajectory
The purpose of this book is not to fuel anyone’s political agendas, nor is it saying that America today is like Nazi Germany or ever will be. Rather, with great skill, tact and wisdom, Lutzer is showing readers the importance of trajectory—in particular, showing where certain trends could lead America, though, as he stresses, not necessarily would.
As religious faith is increasingly privatized, particularly with regard to Christian belief and practice—as church and state are increasingly separated, laws creep in that actually circumvent justice and morality. Freedom of speech is lost in the name of political correctness and a confused view of tolerance. As economies melt down, people can become increasingly willing to give up their civil liberties in exchange for comfort. Media is increasingly used to define the cultural norms of society and sets the moral boundaries. Public school systems increasingly take over the role of training children from parents and in the process have the potential to indoctrinate them with groupthink.
These are the techniques that Hitler used to gain control of Germany. An economically crushed nation, desperate for some glimmer of hope latched onto what it perceived to be a strong leader, one who promised to give the people their national pride back. And he did. In the process, he systematically took complete control of the creation of civil law, made it government-sponsored education compulsory (homeschooling was illegal), turned the people against the Jews, put laws into place that made it not only legal, but acceptable, to murder them.
In essence, he sought to create a Germany in his own image, after his own likeness.
Parallels
Today, there are some parallels in America, according to Lutzer, and as a Canadian it is fascinating to read his concerns. “Political correctness has now affected the general culture and created an aura of censorship and a climate of fear,” he writes on page 27. In addressing the recently approved hate crimes legislation, Lutzer writes,
The bottom line is that we are going down a dangerous path as “hate crimes” are linked to “hate speech” and thus our First Amendment rights are curtailed. . . . From “Hate Crimes” the next step is for the courts to prosecute those who are deemed guilty of “Hate Speech,” which one of our senators called “domestic terrorism.” Thus, what we think and what we say are both open to prosecution. Hate speech in this country will mean . . .  simply stating an opinion that the government thinks should not be expressed. (p. 28)
In Canada, we’re already there. The Canadian Human Rights Commission has prosecuted Canadian citizens for publicly stating their belief that homosexuality is a sin. It attempted to prosecute journalist Mark Steyn and Macleans magazine after receiving a complaint that he was painting an unfair portrayal of Muslims in an article published in 2007 (you can read a bit more about the CHRC issues here). This is but one example.
The parallels that Lutzer addresses—increased government control in economic issues (such as propping up major corporations that are on the verge of bankruptcy due to gross mismanagement) and the devaluing of human beings through the legalization of abortion, the “evolved” form of tolerance that is used to bully people into silence out of fear of being called a ‘bigot” for disagreeing with a lifestyle, sexual orientation or religious viewpoint (unless it’s Christianity) and pushes to see moral absolutes become relative preferences in the school system—paint a disturbing picture.
Focus on the Cross
It’s tempting for many Christians to respond to these issues in a way that is profoundly unhelpful. The “we’re gonna take this nation back for God!” approach. The problem is, political ballyhoo doesn’t work. It never has.
[without the cross, we pound a nail into our coffin! There is a danger that we become so overburdened with social/political agendas that our message is lost amid our many cultural skirmishes. The church has always faced the temptation to modify the Gospel or make it secondary to a given political, philosophical, or cultural agenda. When this happens, Christians have exposure to the culture, but the cross does not. . . . In the evangelical community, psychology is substituted for theology and cheap grace has replaced what Bonhoeffer described as “costly grace.” . . . . We are self-absorbed rather than God-absorbed. (pp. 135-137)
So how should Christians respond? By focusing on the cross of Christ.
We are coming to a time when Christianity in the western world might actually face real persecution, like it has in every other culture for centuries. Lutzer admonishes readers,
As Christians we can welcome an assault on our freedoms as long as we see this conflict as an opportunity to bear an authentic witness to Christ. . . . We must be confident that Christ will set the record straight. (pp. 140-141).
Lutzer practices what he preaches. He never demonizes those he opposes. His arguments are genuinely humble and pastoral. He seeks to bear witness to the grace of Christ and be salt and light in a world that desperately needs it. His admonishment is difficult, but one not to shy away from.
Read When a Nation Forgets God. Wrestle with the implications; be challenged by it—and consider how you will respond. Will it be with silence or with grace and humility as your eyes are focused on Jesus?

Posted by Pastor Steve at 6:03 PM No comments:

Christians, don’t be fooled: Trump has no deep religious convictions

Many Americans appear ready to give President Trump a pass when it comes to his lack of religious knowledge, sensibilities or behavior, but I think that’s a mistake.

Trump is quite pious and his religious convictions run dangerously deep. But his piety is not a reflection of a Christian faith. His piety is formed by his understanding of what makes America a country like no other.

Trump proclaimed Jan. 20, the day of his inauguration, a “National Day of Patriotic Devotion.” Patriotic devotion? Christians are devoted to God, not to any nation. Trump defended his call for a day of patriotic devotion by drawing attention to his other claim — taken on faith — that there are no greater people than American citizens. Faith in Trump’s view, though, requires belief in those things for which we have insufficient evidence.

Christians have a word to describe the worship of that which is not God: idolatry. Idolatry, of course, can be a quite impressive form of devotion. The only difficulty is idolaters usually end up killing someone for calling into question their “god.”

Trump’s inauguration address counts as a stunning example of idolatry. His statement — “At the bedrock of our politics will be a total allegiance to the United States of America and through our loyalty to our country we will recover loyalty to each other” — is clearly a theological claim that offers a kind of salvation.

Christians believe that only God demands “total allegiance.” Otherwise we run the risk, as Trump exemplifies, of making an idol out of some human enterprise.

The evangelistic character of Trump’s faith should not be missed. He suggests that we will rediscover our loyalty to one another through our total allegiance to the United States. Quoting the Bible, he even suggests we will learn to live together in unity.

But history tells us people experience repressive politics for challenging such “oneness.” It is difficult to imagine those who have faced slavery and genocide can be in solidarity with those who believe we can let bygones be bygones.

To which one can only wonder: Who are these people? The answer must be that they are Trump’s people who now wait for his call to action, that is, to make America great again. Trump, in his mind, is not just the president of the United States. He is the savior.

Trump identifies as a Presbyterian. However, he has said he does not need a prayer for confession of sins because he has done nothing that requires forgiveness, one signal that he does not believe in a basic Christian tenet. He has identified with Norman Vincent Peale, who wrote the book “The Power of Positive Thinking,” which does not represent Christian orthodoxy. Christianity in Peale’s hands was closer to a set of beliefs a follower could make up to suit their desires. Trump has adopted this strategy and applied it to the country.

Christians must call his profound and mistaken faith what it is: idolatry. Christianity in America is declining if not dying, which makes it difficult to call Trump to task. Trump has taken advantage of Christian Americans who have long lived as if God and country are joined at the hip. I do not doubt Trump thinks of himself as a Christian, but America is his church.

Christians have a church made up of people from around the globe. That global interconnectedness might just produce a people with the resources to tell Trump “no.” At the very least, Christians in the United States have little to lose by beginning to reject our long love affair with American pretension.

Stanley Hauerwas’s most recent book is “The Work of Theology” (Eerdmans). He is retired from the Divinity School of Duke University. Most recently he was chair in ethics at the University of Aberdeen (Scotland). 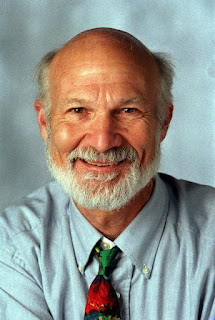 Posted by Pastor Steve at 6:00 PM No comments: